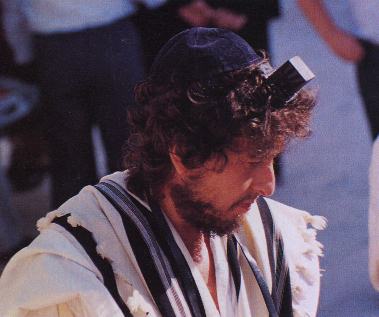 Bob Dylan: Tangled Up In Jews

This web page is devoted to studying and collecting trivia relating to the Jewish religious/cultural odyssey of Shabtai Zisel ben Avraham v'Rachel Riva, a.k.a Bob Dylan.

Highlights of Dylan's Judaic journeys include:

I wrote Bob Dylan: Tangled Up In Jews in 1991 for the Washington Jewish Week. Taking off from the then-just-published Clinton Heylin biography and the Bootleg Series boxed-set, it looks at Dylan's life and times through decidedly Jewish spectacles.

You can view it as one article (3000 words) or as five chapters:

Ronnie Schreiber took his camera with him on a recent pilgramage to Dylan's hometown of Hibbing. Check out the in-line JPGs (less than 100k total) of Dylan's childhood shul and his father's grave.

Dylan was profoundly influenced by the sons of two great Yiddish writers. Here's a hint: One of the writers wrote the famous Yiddish novel "Before the Flood."

A collection of anecdotes about Dylan, from first-hand, second-hand, and Internet sources. Contributions welcomed.

Dylan has made several trips to Israel, some personal, some professional. Here are, so far, highlights from two of them.

What fuels Dylan's muse? Could it be the sight of Israel with its back against the wall? For those of us who know Dylan's motto that "sometimes Satan comes a man of peace," that prospect may not be too surprising.... Take a look at Dylan's muse and Israel's wars and check out my speculation for yourself.

Where is Dylan at these days? Is he Jewish? Is he Christian? Can the answer be blowing through his tour dates and set lists?

The First Annual Bob Dylan Ceremonial New Year's Bread Toss, in which Bob's rabbi shares where it's at, and the man himself blows the Jewish horn.

Talkin' Hava Nagilah Blues: The history of the Hebrew folk song that Dylan parodied at the start of his career.

Was Dylan singing about things Jewish? A collection of Dylan lyrics amenable to Jewish interpretations.

Who is the Jokerman? We claim Jesus is not the answer. (We also provide a non-tabular version for people whose Web browsers can't handle tables.

Martin Grossman has an intriguing interpretation of I and I.

Several Dylan songs have been translated into Hebrew. I've translated the first two stanzas of All Along the Watchtower. Israeli folk singer Yonatan Gefen (father of current pop star Aviv Gefen) translated several songs, including Girl from the North Country and Blowin' in the Wind. If you can help me with my collection of Hebrew versions of Dylan, please let me know!

Tangled Up in Black. is a parody I wrote for the Purim holiday a few years back. Recommended for those with some knowledge of Jewish life. Neither Dylan nor Sony Corp. bear any responsibility for its contents.

I Dreamed I Saw Maimonides is less hilarious, and probably owes more than it should to Bruce Springsteen.

Alan Zoldan has contributed his "Apocalyptic Dream," to the tune of "When I Paint My Masterpiece" -- with a little of New Morning mish-moshed in, as well as a take on Something There is About You for the Shavuot holiday.

What fuels my muse? A letter to a reporter answering questions about the motivations behind this Web page.

Our readers write! Selections from letters to the editor of Tangled Up in Jews.

Visit my home page, read my resume or send me mail.

This page maintained and copyright by Larry Yudelson. Comments, suggestions and material for this page are eagerly welcomed, and should be sent to yudel@well.com.

For more information, visit my home page or read my resume. If you're interested in Israeli music, check out my RadioHazak page.